On Friday 21 June 2019 Heidi Alexander, London’s deputy mayor for transport, announced that Transport for London (TfL) would ‘pause development work’ on the proposed Rotherhithe to Canary Wharf bridge project. The reason given was that the estimated midpoint cost of the scheme had risen to £463m and that the final cost could be over £600m. TfL’s budget for the project was £350m.

Back in November 2017 TfL published a background report on the Rotherhithe to Canary Wharf Crossing which considered the Benefit/Cost Ratios of alternative crossings at this location. The report used a capital cost for an opening bridge of £120-180m, it priced an immersed tunnel at £325-335m and for an ‘enhanced’ ferry £30m. From these figures the report concluded that the opening bridge would, if it came in toward the bottom end of the cost range, provide a BCR greater than that of an enhanced ferry.

When we read this report we felt that the benefits of a ferry option, compared to a bridge, did not seem to have been fully appreciated. In particular the disruption due to passing ships, which would require the bridge to be opened for 30 minutes or more, would be very much less for a ferry. We also felt that a ferry could be delivered quicker, and possibly cheaper than the estimated £30m, and that the opening bridge, one of the world’s longest, would cost significantly more than £180m. Following the 2017 public consultation TfL awarded a contract to Atkins for developing designs for the bridge option alone; no further work was to be done to investigate the ferry option.

We fully support TfL’s ambition to improve the Rotherhithe crossing; the existing ferry is designed principally for guests at the Hilton hotel and is not really suitable for general public use. However we believed that it was unfortunate that only one option for an improved crossing was being taken forward for further development; we felt that an enhanced ferry solution should also be worked up so that a better informed cost benefit analysis comparison could be made once the bridge cost estimate was firmed up.

Our colleagues at Thames Clippers, who run the existing ferry service, had similar thoughts; they had been working on a concept design for an electric, zero emission ferry with cycle-on cycle-off capability that could be used on this route. This vessel has a capacity of 150 passengers of which 50 could be cyclists. Electric bikes, mopeds and scooters can also be accommodated. A service using three of these vessels could carry up to 2,250 passengers per hour each way fully meeting the forecast capacity requirement of a bridge. Intervals between sailings would be only 4 minutes during peak times with all three ferries in operation. We agreed to work together to develop this enhanced ferry concept on a self-funded basis so that when TfL’s bridge scheme was put out for its next public consultation a fair cost/benefit comparison could be made. 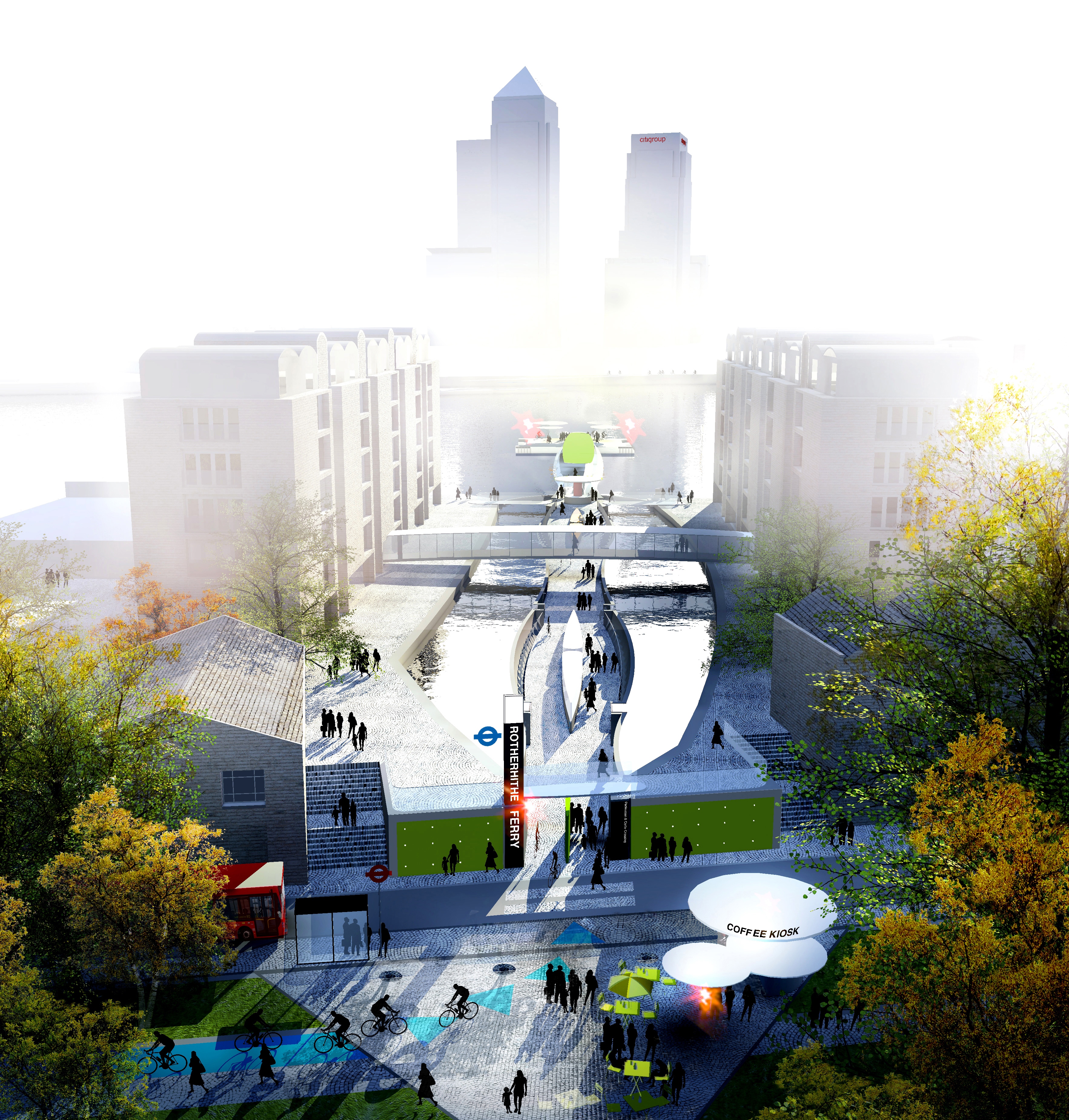 Key to the design of the scheme was finding a location that worked for a new high capacity pier at Rotherhithe. The existing pier, which we designed back in 1990, has served the Double Tree Hilton hotel well but it was never intended to serve cyclists. To help us solve the problem we brought in Anthony Carlile, an architect we have worked with regularly on pier projects. 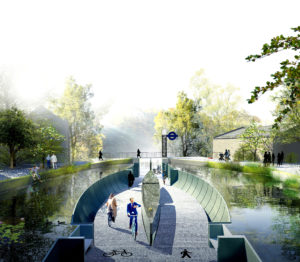 es followed until Anthony suggested that we bring a new pier ashore through the old Nelson dry dock that lies at the heart of the hotel. It seemed radical to run the access through a listed structure but checking the levels showed that it could be made to work. The arrangement has the great advantage of providing the pier with a strong presence on Rotherhithe Street giving an easy connection to Route 425 on the National Cycle Network. We designed the access to incorporate features to aid interpretation of the ship building and ship repair history of Nelson  Dock and the surrounding area of riverside. 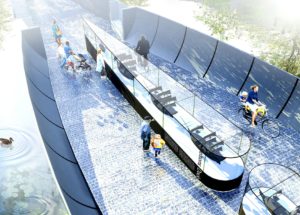 Next was the design of the vessels to be used for the ferry service. To meet the government’s zero net carbon target for 2050 they clearly have to be electric powered. Thames Clippers have used Aus Yachts from Brisbane, Australia to design previous vessels and our in-house naval architect exchanged ideas with them to develop the concept design for a double ended catamaran ferry with roll-on roll-off capability and an auto mooring system. The mooring system is critical to achieving a fast turn-around for the vessels.

There are a number of proprietary auto-mooring systems on the market, such as the magnetic system fitted to the new Woolwich ferries. Other manufacturers use vacuum pads or mechanical hooks. However all these systems are relatively complex and require a significant amount of equipment on the berth; for our small ferries we needed something less complex, lighter and with minimal power demand. To solve the problem we have developed a simple drop arm mooring on the vessels which engages with a cushioned yoke on the indented pontoon berth. The mooring can either be operated from the vessel’s helm position or can be made automatic.

All electric propulsion is less of a challenge; there are now a number of electric Ro-Ro ferries in operation, notably in Scandinavia. Norway is leading the zero emission transport revolution and has resolved to become zero carbon by 2030, a full 20 years before the UK. Norway introduced the world’s first E-ferry, the Ampere, in 2015 and is on track to have 70 electric ferries operational by 2021.

The work done by TfL on rigorously investigating the bridge option has been a valuable exercise because it conclusively demonstrated the economic obstacles to construction of low level opening bridges in east London where the river is wide and passing ships are large and numerous. Moving further east the challenges only become more onerous (although there is a possibility to build a bridge with moderate opening spans at the Thames Barrier, see previous new item here.). Nevertheless there is a growing need for more river crossings for pedestrians and cyclists and the only economic alternative to low level opening bridges is ferries. And to meet our air quality targets, these ferries must be zero emission.

Rotherhithe is the logical first site for an E-ferry crossing but we believe that two further E-ferry crossings should follow quickly, the second on the east side of the Isle of Dogs and the third between Barking Riverside and Thamesmead. Combined with the existing Woolwich ferry these additional crossings will transform connectivity across the river in east London. 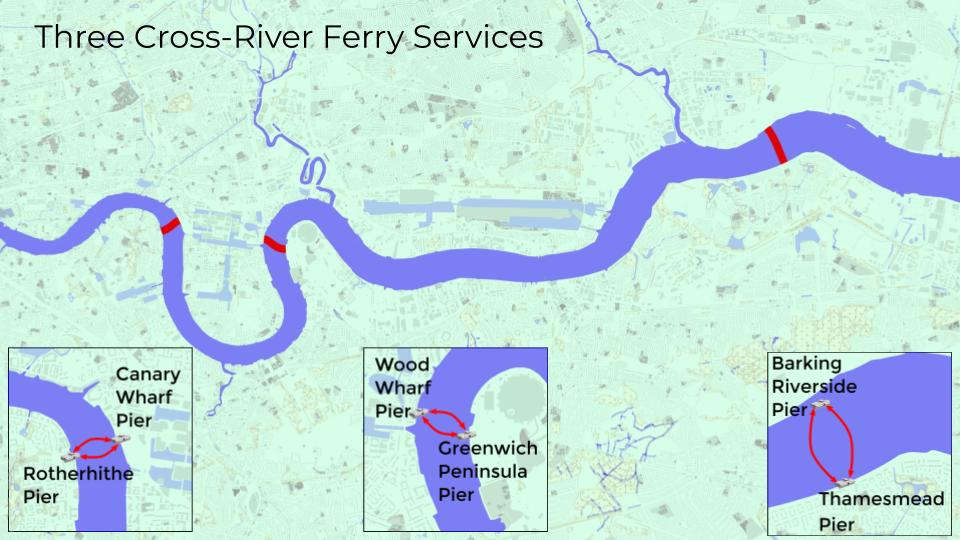 On account of this proposal’s ability to act as a catalyst for sustainable transport it won the Impact in Transport category at the NCE100 Awards in April 2019. For further details of that award see our earlier news item here.

We use cookies on our website to give you the most relevant experience by remembering your preferences and repeat visits. By clicking “Accept All”, you consent to the use of ALL the cookies. However, you may visit "Cookie Settings" to provide a controlled consent.
Cookie SettingsAccept All
Manage consent

This website uses cookies to improve your experience while you navigate through the website. Out of these, the cookies that are categorized as necessary are stored on your browser as they are essential for the working of basic functionalities of the website. We also use third-party cookies that help us analyze and understand how you use this website. These cookies will be stored in your browser only with your consent. You also have the option to opt-out of these cookies. But opting out of some of these cookies may affect your browsing experience.
Necessary Always Enabled
Necessary cookies are absolutely essential for the website to function properly. These cookies ensure basic functionalities and security features of the website, anonymously.
Functional
Functional cookies help to perform certain functionalities like sharing the content of the website on social media platforms, collect feedbacks, and other third-party features.
Performance
Performance cookies are used to understand and analyze the key performance indexes of the website which helps in delivering a better user experience for the visitors.
Analytics
Analytical cookies are used to understand how visitors interact with the website. These cookies help provide information on metrics the number of visitors, bounce rate, traffic source, etc.
Advertisement
Advertisement cookies are used to provide visitors with relevant ads and marketing campaigns. These cookies track visitors across websites and collect information to provide customized ads.
Others
Other uncategorized cookies are those that are being analyzed and have not been classified into a category as yet.
SAVE & ACCEPT