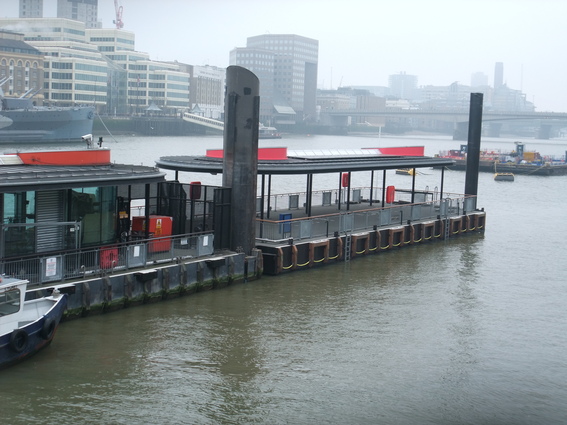 The 30m long extension to London River Service’s busiest pier is now complete, in good time for the Queen’s Diamond Jubilee river pageant. While the extension pontoon has been designed to blend with the existing pier the extension’s energy strategy represents a major advance for Thames piers and is the first carbon neutral pier on the river. This efficiency has been achieved by the use of low energy LED lighting combined with two banks of solar PV cells on the roof. The LED lighting will consume circa 2,000 KWhrs through  the
year while the calculated output from the PV panels is in excess of6,000 KWhrs per year with the surplus being fed back to the grid.

The pier is a particularly good project for solar PV having a large roof space for the panels combined with low energy lighting and modest lighting lux levels. Except for the shadow from the Shard building at London Bridge the pier is also unshaded which maximises output. The extension’s electrical system is expected to be the model for future Thames pier projects when there is a roof area available for the panels.