Today Heidi Alexander, London’s Deputy Mayor for Transport, opened the new Royal Wharf Pier at Silvertown. The pier is not only London’s newest passenger pier it is also at 130m from the shore, the city’s longest pier as it serves as a promenade pier as well as a transport link. 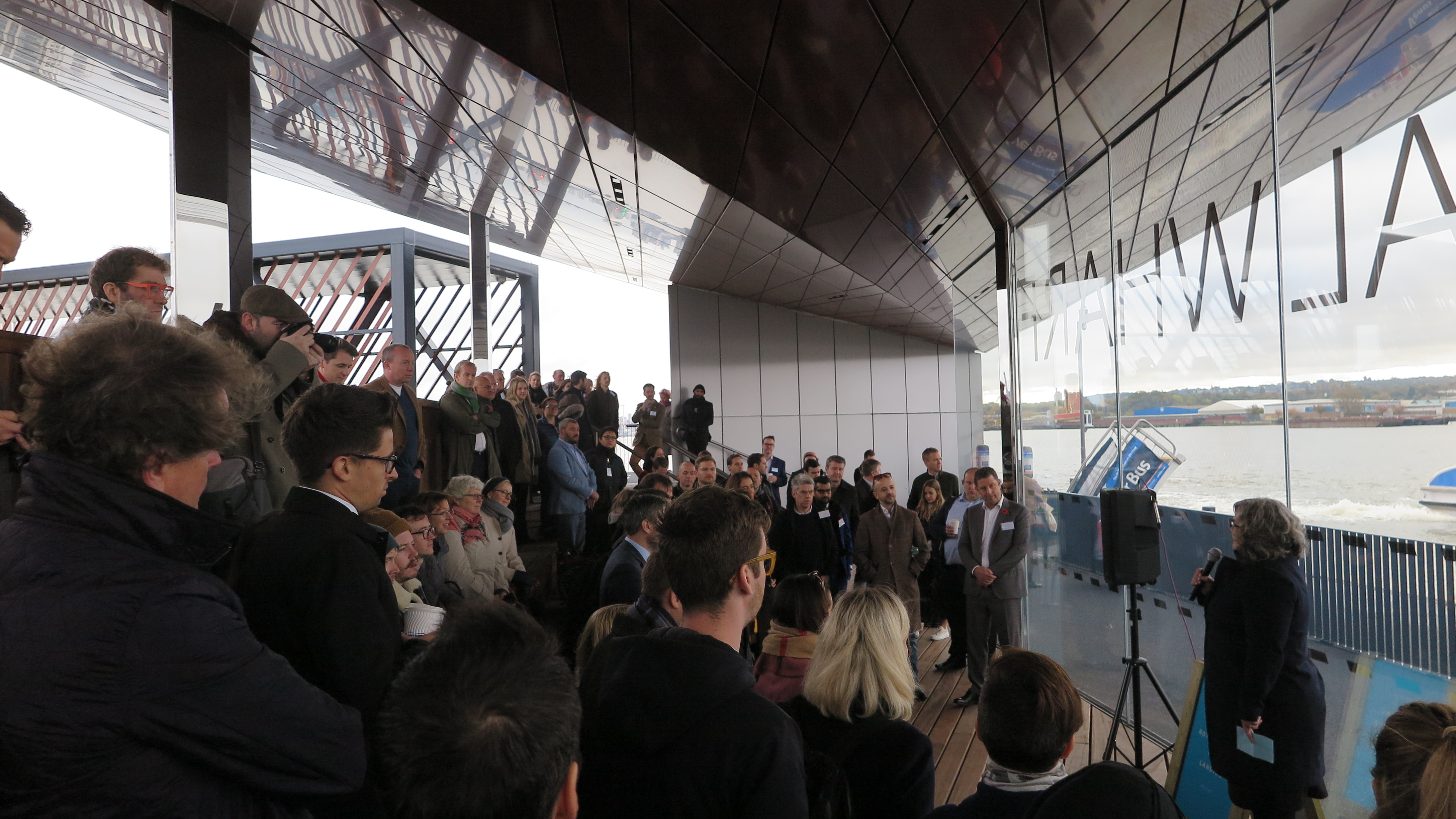 Our client, the developers Ballymore and Oxley, wanted an architecturally exciting pier so they arranged a design competition which was won by Nex Architecture. Beckett Rankine were appointed as maritime and structural engineer and also as the project manager. The pier’s lighting scheme was designed by DHA Design.

The main contractor for the pier was McLaughlin and Harvey with Red7 as piling sub-contractor and Ravestain as fabricator of the pier pontoon and the bridges. Ravestein also delivered and installed the bridges using their Skylift 3000 crane barge.

The pier design provides a welcoming experience with tiered timber seating in a glass and mirrored aluminium clad enclosure. The effect is like a miniature auditorium where passengers awaiting a vessel can sit and enjoy the riverscape. At night the pier itself becomes the show with DHA’s energy efficient lighting design producing a shimmering and welcoming vision full of reflections and warmth.

Such is the quality of the design that it won an NLA Transport & Infrastructure design award even before it was finished. This award was in recognition of the new standard that the project has set for passenger piers on the Thames. We suspect that it could go on to win many more accolades.

We use cookies on our website to give you the most relevant experience by remembering your preferences and repeat visits. By clicking “Accept All”, you consent to the use of ALL the cookies. However, you may visit "Cookie Settings" to provide a controlled consent.
Cookie SettingsAccept All
Manage consent

This website uses cookies to improve your experience while you navigate through the website. Out of these, the cookies that are categorized as necessary are stored on your browser as they are essential for the working of basic functionalities of the website. We also use third-party cookies that help us analyze and understand how you use this website. These cookies will be stored in your browser only with your consent. You also have the option to opt-out of these cookies. But opting out of some of these cookies may affect your browsing experience.
Necessary Always Enabled
Necessary cookies are absolutely essential for the website to function properly. These cookies ensure basic functionalities and security features of the website, anonymously.
Functional
Functional cookies help to perform certain functionalities like sharing the content of the website on social media platforms, collect feedbacks, and other third-party features.
Performance
Performance cookies are used to understand and analyze the key performance indexes of the website which helps in delivering a better user experience for the visitors.
Analytics
Analytical cookies are used to understand how visitors interact with the website. These cookies help provide information on metrics the number of visitors, bounce rate, traffic source, etc.
Advertisement
Advertisement cookies are used to provide visitors with relevant ads and marketing campaigns. These cookies track visitors across websites and collect information to provide customized ads.
Others
Other uncategorized cookies are those that are being analyzed and have not been classified into a category as yet.
SAVE & ACCEPT