In the summer of 2019 Planning in London magazine (PiL) set its readers a challenge, it was to come up with a quick fix for the closure of Hammersmith bridge. The current Hammersmith bridge is a suspension bridge designed by Sir Joseph Bazalgette and was opened in 1887; Bazalgette’s design reuses the foundations of an earlier suspension bridge designed by William Tierney Clark which was opened in 1827. The 1887 bridge is one of the oldest over the Thames and has had a recent history of structural troubles, probably not helped by having been the target of a couple of bomb attacks by the IRA. After a number of closures for limited repairs the bridge was closed to all vehicular traffic in April 2019 pending a major structural refurbishment which, it has been reported, will cost over £140m and take at least three years to complete.

While the results of recent structural surveys have not been published  this report from 1997 by Hyder shows that the bridge’s structural defects are extensive. So the repair works are likely to include the complete replacement of the timber deck, repairs to the deck beams and the main stiffening trusses, work to the hangers, chains and chain supports as well as the tower bracings. Such an extensive programme of work will require the full closure of the bridge, including to pedestrians and cyclists. 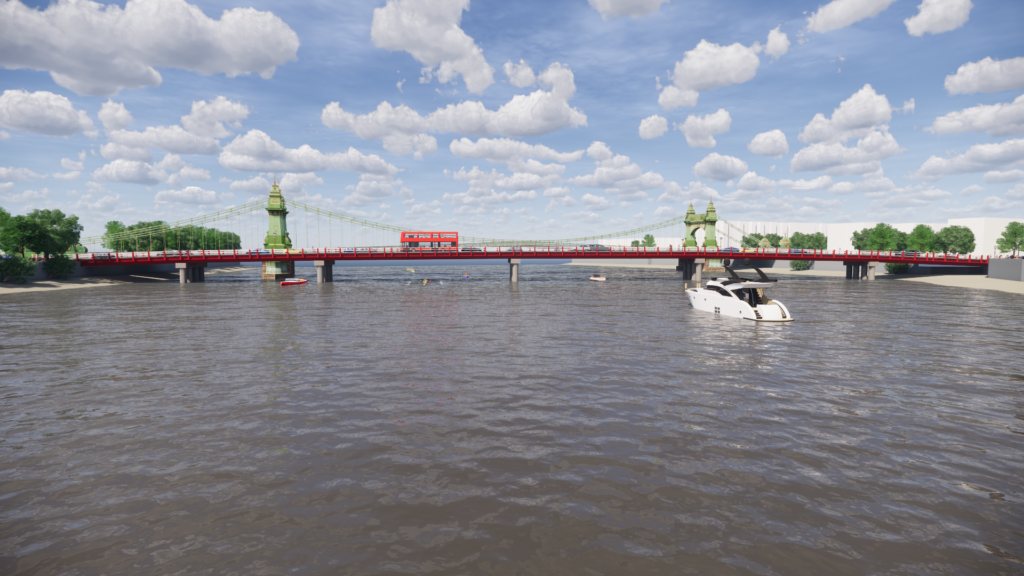 Beckett Rankine have done a few jobs near the bridge at the new Queen’s Wharf development and also at Fulham Reach Boat Club pier so we know the area. When we read PiL’s challenge we immediately thought that the only way of providing a quick fix was to construct a temporary bridge close to the existing and to use off-the-shelf bridging units for the task. In considering locations for the temporary bridge at first we thought about sites upstream but we concluded that providing access to the bridge across St Paul’s school playing fields could not be done quickly, if at all. However the downstream side looked more promising; there are two public slipways almost in alignment with each other. One is on the south bank immediately next to the bridge and the other, on the north bank, slightly downstream at the end of Queen Caroline Street. These slipways are narrow so the question was could a temporary bridge be fitted into this space? We sent one of our engineers out to measure up. He concluded that we could fit a 7.5m two-lane carriage way in to the 10.5m gap between the bridge and the nearest property. There is the option to divert the footway over the end of the existing bridge landing to improve the clearances. 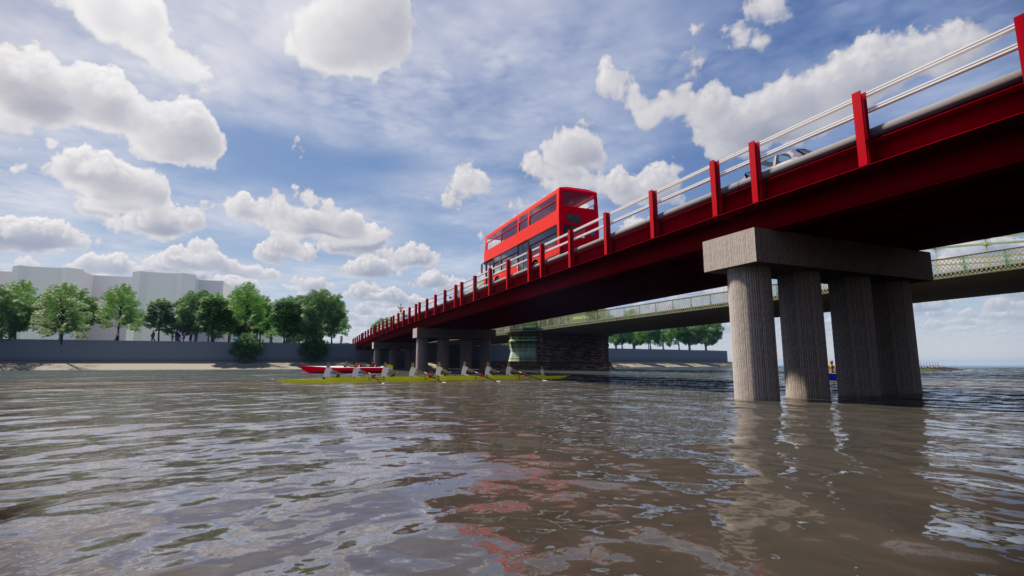 The next question was what sort of bridge units to use? For a quick fix the units had to be stock items available off the shelf and, ideally to hire so as to minimise costs. The best known system of temporary bridging is the Bailey Bridge which was developed by Sir Donald Bailey in 1940. Bailey bridges have been used for many road crossings but their panel deck system is not ideal for a busy roadway as the deck panels work loose and have to be periodically retightened. So instead we based our proposal on a more modern design of temporary bridge of a type which is currently being used at the Battersea Power Station development. RetroBridge Heavy Bridge (RHB) units are up to 40m long and can carry full highway loading. RHB units are 2.5m wide and three units side by side provide a 7.5m wide bridge which is sufficient for two lanes of traffic. The bridge units are pinned together and require no maintenance, even if heavily trafficked. A cantilevered pedestrian walkway can be bolted onto one, or both sides. 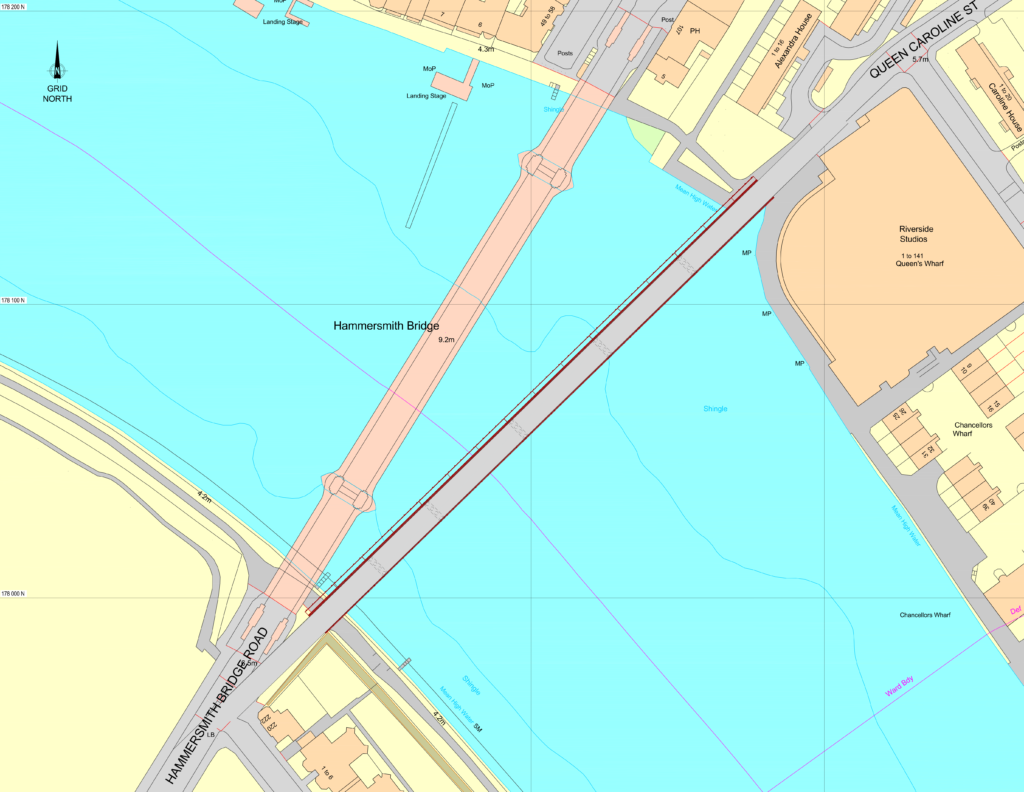 The bridge spans will need to be supported on temporary piled supports and, using the maximum 40m span units for the central spans, we drew up general arrangement for the bridge that would minimise interference with navigation on the river while at the same time avoiding Thames Water’s sewer along the north bank. The Thames Tideway Tunnel runs south of the southern bridge abutment and so is not affected. The elevation of the bridge deck would have the same clearance as Hammersmith Bridge above the water. We drew this proposal up in 3D and prepared rendered images for our submission to the challenge which, PiL stipulated, had to be on a single side of A4. The Autumn issue of PiL, which container the Hammersmith Bridge proposals was published on 10th October; all four published entries can be found here. 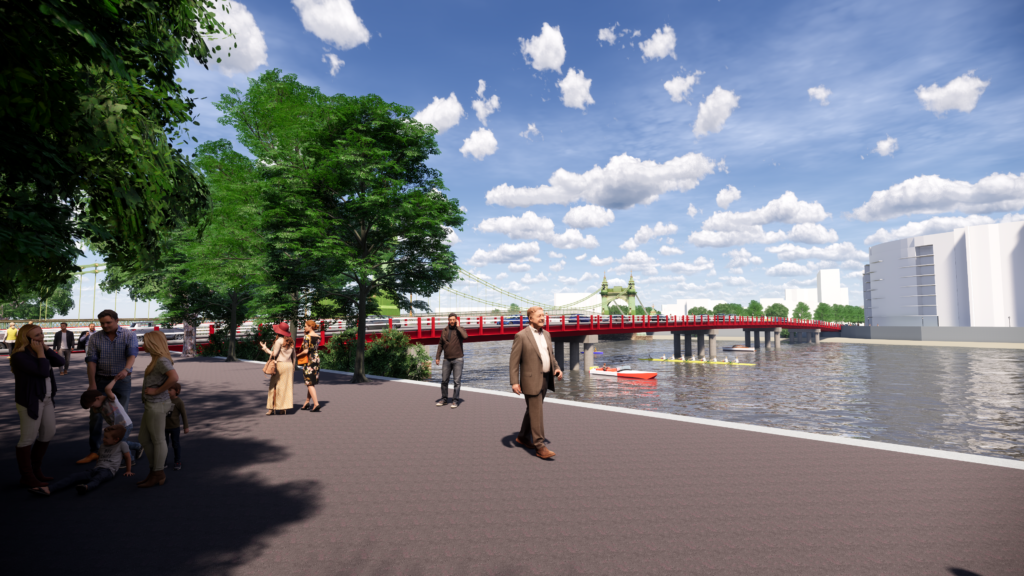 New Civil Engineer magazine has run a number of articles on Hammersmith Bridge over the years; they picked up on our proposal publishing it on 16th October here.    Things then moved quickly and on 17th October a group of residents of East Sheen, an area seriously affected by the bridge’s closure, set up a petition calling for our temporary bridge to be built. The petition, which can be found here, gained over 2,000 signatures in less than a week. Also on 17th October Sadiq Khan, the Mayor of London, undertook to instruct TfL to examine the proposal along with an alternative scheme for a temporary bridge for pedestrians and cycles only.

We welcome TfL’s review but we think a vehicle bridge is the better option because it can not only fund itself but can also contribute towards the cost of restoring Hammersmith Bridge. A temporary vehicle bridge could be tolled using the same ANPR technology as used by TfL for the Congestion Zone. Hammersmith Bridge used to carry in excess of 20,000 vehicles a day; assuming a toll of just £2 and a possible halving of the traffic to 10,000 vehicles a day the temporary bridge would cover its £5m cost in about 9 months.

We believe that car drivers will accept a toll on a temporary bridge, especially if it helps to fund repairs to the permanent one. Furthermore this is probably the only bridge crossing in London on which a toll would be accepted. In contrast there would be no prospect of tolling a temporary pedestrian and cycle bridge so the construction of such a bridge would be a drain on public funds rather than a contributor to them.