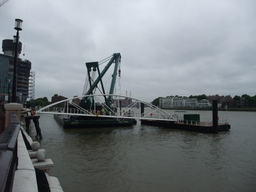 The installation of London’s latest pier at the St George Wharf development in Vauxhall was completed today when main contractor Red 7 installed the brow. The brow and pontoon have been fabricated by Ravestein in Holland and were delivered to site on their Skyline 19 crane barge which also was used to lift in the brow. St George Wharf Pier has had a long gestation period and we first prepared designs for it in 1999 shortly after we designed North Greenwich Pier at the O2. Like North Greenwich Pier St George has a bow string brow but we felt then that we could improve on the appearance of this structural form; we hope that the result confirms our judgment. The pier and brow are both fitted with timber decks which incorporate non-slip carborundum inserts.

The new pier adds to Thames Clippers’ scheduled service being the new upstream end of their routes. Regular boats run from St George Wharf to Blackfriars and by changing there it is possible to travel from Vauxhall to Canary Wharf in only 32 minutes.